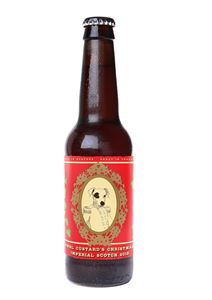 Colonel Custard’s Christmas Ale is the first in what will be an annual beer release to celebrate the festive season.

In honour of our late and legendary Jack Russell, we’ve named this beer after him. At the ripe old age of 17, Tusker (known affectionately as “Coo Coo”, “Colonel Custard” or “You horrid little dog” on account of his notable scent) was a loyal supporter of Black Isle to the very end.

Making his way from the farmhouse to the brewery everyday, he would take his position in the office armchair, presiding over meetings and generally making his presence known to all. Since puppy-hood, he’s been with us at farmers’ markets, shows and events; starting his brewing career in Sales and Marketing and making his way to Chairman of the Board.

Now he’s made his way to the Elysian hop gardens in the sky, we’ve decided to commemorate his huge life with an annual Christmas beer series.

This inaugural brew is a 9.2% Imperial Scotch Ale that represents both his strength of character – and his height in inches at the shoulder.